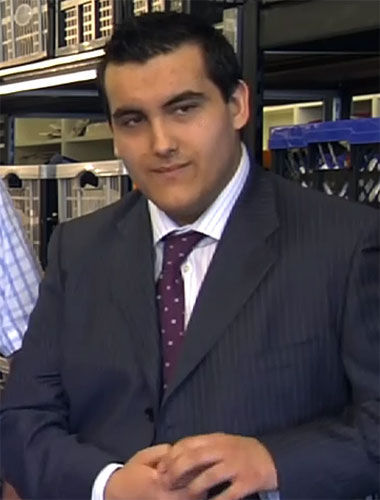 I began working here at the Web Shop Direct group in June 2008. After Dawn and Jonathan, I have been here at UK Tights, UK Swimwear and UK Lingerie longer than anyone else. I'm here of my own free will, I swear.

As you've read on other bios (you must have, them being such page-turners), I am the eldest son of our two founders. I joined the company straight out of secondary school. With a handful of A-levels obtained through bribery, I decided not to go to university. As much as the auditory damage and self-poisoning of Freshers sounded fun, I decided to start work.

I studied English at school and was active in a lot of writing competitions, both poetry and prose. It was like that movie with Hilary Swank, except my life never got a soundtrack by the Wu-Tang Clan. After I left school, I decided that I wanted to carry on writing as a career. But most novels aren't read anymore, and nobody has seen a play since Eugene O'Neill died. So, I turned to the web.

I began in the warehouse and doing all the little jobs that need doing in a small business. Then we grew and I moved department, writing our blog and all our copy.

Thanks to the ensuing deluge of prose not seen since Faulkner, we flourished. Soon enough, the job became too big for one man. Even if it was the man who we all know should have won the Pulitzer they gave to Kendrick Lamar. You know, the guy who wrote his lyrics in all caps. A fine choice.

For the past few years, I have focused on website copy and press. My fantastic colleague Marta does the blog and social stuff now. Most of what you can read on our site is mine, unless I was on holiday. You can tell it it's the latter, because of the "creative" uses of the humble apostrophe. I also run our affiliate program.

As I have written and rewritten my Tinder profile many times before, I know this next section by heart. Seriously though, go take a look at our range of cool stuff already.

I like old rock music and blues. I'm convinced people who listen to The Smiths are convincing us it's cool as a practical joke. Nirvana is also overrated, but not as overrated as The Beatles.

I read a lot of books, as you may have guessed. I like Lovecraft, Chambers, Bradbury, Heinlein, Vonnegut, Huxley, Kawabata and Mishima.

I'm not a nerd though. I like classic American cars, good beer, better whiskey, Muay Thai and I travel a lot. Thanks for reading, now go see our range, it's way cooler.