Hosiery Trends Over The Decades

UK Tights has recently published an article on and the history of hosiery and it's creation, but this article looks more closely at what kinds of designs have been popular on leg wear over the years and decades. When people think of hosiery trends, they think of the last forty or fifty years or so. This is because tights as we know them have always looked the way they look and been made to be worn a certain way. But they've not always been just for women and they've not always been made of Nylon.

There was hosiery before the invention of the Nylon

Leg wear started to catch on as a part of everyday dress in the Middle Ages. At first, it was a garment for men and women, but often women's skirts were long enough to cover their legs entirely. Whilst they were worn for warmth, the manufacturing process was always difficult for leg wear and as a result, they became a fashion statement and a marker of wealth.

In the 15th century, leg wear started to become more of an accessory than ever and this tradition started in an unusual way. In 1477, the Swiss won an important victory against Burgundy. The flags and banners of Burgundy that were left on the field were retrieve, cut up and turned into scrap fabric for repairing uniforms. The Swiss proudly wore their foe's insignia as a symbol of their prowess. This tradition caught on elsewhere and soon nobles were sporting their family crests on their leggings. The Swiss Guard actually keeps this tradition alive today and where brightly coloured striped leggings and other garments as part of their official uniform. Ever since this time, brightly coloured and highly ornate patterns on garments were considered fashionable and some of this tradition has persisted into modern times. So what exactly is the modern hosiery scene's history? 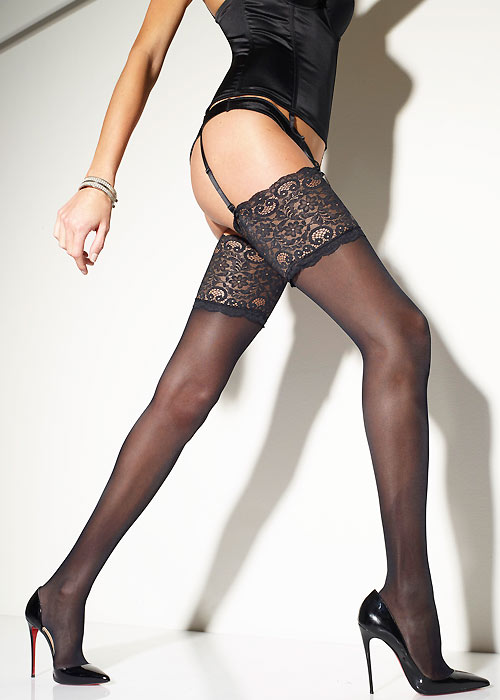 What about more recent trends?

Hosiery saw a resurgence in the '40s and fifties after the war. Scarcity of Nylon and silk made stockings very desirable and coveted amongst women and as soon as rationing stopped, they become incredibly popular once again. The style was mostly plain, which reflects the rest of the era. Austerity was the watchword of the decade and this carried across into style and fashion. Stockings were tan or beige and were either plain or had a back seam.

As the Fifties came around, more cheerful patterns started to emerge. Florals became some of the most exciting and popular types of motifs out there. As austerity started to wane and become unpopular, the more cheerful colours and patterns saw a resurgence.

Mary Quant and Pamela Mann Legwear in the 60s

Florals and bright colours are a classic choice though, so they didn't see any dip in popularity when the 1960s arrived. Flower Power is iconic and synonymous with the Sixties. It was present in everything that people designed and manufactured, even in their tights. But the flowers of the Sixties were more artificial and Pop Art in style.

Mary Quant, who founded the brand Pamela Mann Legwear, was one of the first to attempt this style of design, building on her success with popularising the mini-skirt. Comic book style fashion meant that delicate and dainty stitched florals that were so popular in previous decades went out of the window and more sharp and abstract version were introduced. By this time, tights were much more popular that stockings for their convenience and easy of use.

Florals, abstracts and psychedelia in the 70's hosiery trends

Fashion took the lessons they learned in the 1960s about more vibrant colours and took them to the extreme in the 70s, but in a completely different direction. Instead of florals, more psychedelic and abstract patterns were most popular amongst fashionistas. This was true for all different kinds of garments, but no less true for tights and other kinds of leg wear.

Although these were the most loved styles of their time and these were the styles that became most representative of their times, it's not fair or accurate to pigeon-hole a decade entirely. The '70s was also the decade of disco. Disco fashion is characterised by shine and glitter. Whether it be gold silver or any bright and noticeable colour, disco was most associated with fashion that really stood out and shone. Meant to compliment and make the most out of the clubs and bars that the disco scene took place in, these kinds of materials certainly didn't die in 1979 when the music did. Even today, lurex is a great fabric for adding a unique glitter and shine to your tights and it's remained very popular with people looking to join in the nightlife.

The born of the leggings legwear

As for the '80s and '90s, leg wear took a dramatic turn away from tights and towards leggings. Like the change from stockings to tights before it, the convenience and durability of leggings out-did more fragile tights designs. Combine this with their futuristic look and you have something that really appealed to the style of the day. The neon and cyberpunk feel of these two decades was perfectly complimented by the close-fitting, wet-look of black shiny leggings or the raw, party-ready animal prints that were as wild as the hair.
As for the present day, all the most iconic and best trends of the past have made their way into our recent portfolios and designs are reviving all the above styles, one by one. This means all the most loved and praised artefacts of recent years and bygone decades are at your fingertips to explore and tryout for yourself.

» Autumn Is Here Time for Tights
» Pretty Polly Interview
» The Dos And Dont's Of Leg Wear
» The History Of Nylon
» Tights, The Most Versatile Kind Of Leg Wear
» A Huge Line Up Of Tights And Stockings
» How Tights Are Made
» Stockings Or Tights
» Hosiery Trends Over The Decades
» A Brief History Of Hosiery
» Choosing The Right Tights For Your Outfit
» An Interview With Charnos Hosiery
» All About Girardi Hosiery
» Wolford
» Wolford's 5 Steps For Making Tights Last Longer
» The Wolford Fatal Dress
» Red Or Dead
» Hold Ups, What They Are And What They Can Do For You
» Hold Ups
» Aristoc Ultra Bare is the best sheer tights range
» What Are Pantyhose
» What is the difference between leggings and jeggings
» Spanx The History Of The Power Panties
» The Different Types Of Lingerie
» Calvin Klein Underwear Essential For Under An Outfit
» Coemi Lingerie Have Amazing Nightdresses And Playsuits