The History Of Nylon

The history of Nylon really starts with the term hosiery which was first coined around the early 16th century. This was mainly due to the fact that tights in its singular form were called hose, this is where the word pantyhose came from. Most men at this time wore hose as a part of their daily outfits. If you've ever been to see a Shakespearean play you will no doubt be aware that most of the characters wear hose. These were mainly knitted garments and were made from yarns such as cotton and silk. These products were quite expensive as at the time, almost all leg wear was made from silk imported from China. It was not good etiquette for women to show their legs so hosiery was not a necessary part of a lady's wardrobe.

The 20th century soon changed all that. Once the Victorians custom of dressing a lady's legs was gone, people found it fashionable and fun to show off their shapely figures a lot more and leg wear soon became a more acceptable type of garment.

The Invention of Nylon

The 1930s brought us the invention of a very famous fabric we use each and every day. Nylon. This product was to change the face of hosiery forever. Wallace Carothers, Julian Hill and a team of men were employed as researchers for the DuPont Company. Wallace Carothers was a brilliant man who held a PhD in chemistry and became a professor of Harvard. He was revered as being one of the world leaders in the discovery of Nylon and other products such as neoprene. Despite having a wonderful career and having more than 50 patents to his name, he was a very troubled man and sadly ended his own life.

Whilst working for DuPont, this team's job was to study chains of molecules called polymers to find new uses for crude oil. They specifically wanted to create innovative new materials, fabrics and manufacturing components. As they attempted to find a substitute for silk, as we know was very expensive, they stumbled upon this. By pulling a heated rod out of a mixture of carbon, alcohol, coal tar and water, they found that the mixture stretched. At room temperature, it had a silk-like look and feel. The texture was very similar to silk and, eventually, this work culminated in the production the first Nylon fabric, thus marking the start of a new era in the hosiery marketplace.

As Nylon was very experimental and DuPont's competition was already developing similar materials, it was essential that this product be patented. DuPont did this in late 1939 and this new and wonderful synthetic fibre was finally born. To this day, all Nylon is produced by DuPont or a registered manufacturer of theirs. This incredible new yarn was first exhibited in New York at the world famous Trade Fair that is held there each year. According to Charles Stine, Vice President of DuPont, this was the most revolutionary product man had encountered since the wheel. His words were "We enter the world of tomorrow" He didn't tell his story to the scientific society but to nearly three thousand women who were a part of a club who gathered there each year. 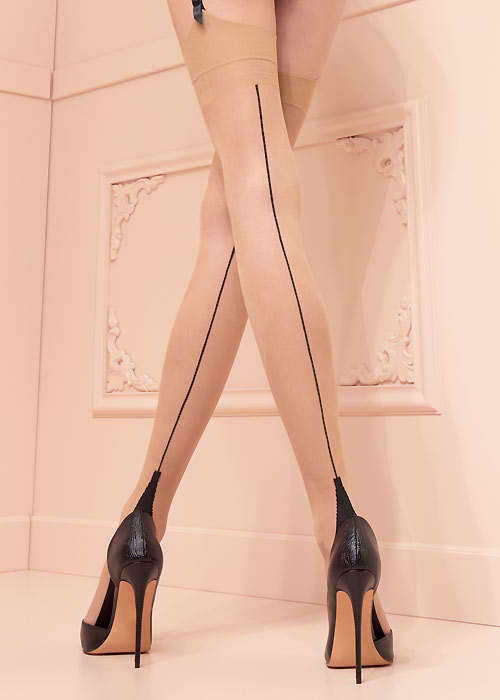 Nylon wasn't just used to make fabulous stockings though. It is a little known fact that Nylon was used in the film The Wizard of Oz. The tornado that carried Dorothy to the Emerald City was made of Nylon!

In early 1942, Nylon went to war and was used to make parachutes alongside silk and was also used in tents because of its waterproof properties. Stockings were still a firm favourite though and they were used as gifts from American soldiers to impress the ladies of both the US and Britain. They were of course very scarce until the end of the war, but if you had contacts you could source them for sure.

If a lady was unlucky enough to not be able to locate a pair of Nylons, then the custom was to rub brown makeup on one's legs and then carefully draw a black line from the heel right the way up the back of the leg. Thus giving the illusion of back-seamed stockings.

The end of the war saw an upturn in production of Nylons but the demand was so high that DuPont had to call a halt to all sales. They basically couldn't make them fast enough. More than 10,000 anxious shoppers mobbed stores.

The birth of the Fully-Fashioned Stockings

When Nylon was first invented the only hose available were stockings. With the addition of a seam that ran from the heel to the top of the leg the term fully fashioned stockings was born. This meant that the leg would be shaped to your leg and that there would be little or no stretch in them. They were very special and had to be made in many different sizes in order that they might fit perfectly.

There was a great deal of work, which went into the manufacturer of the fully fashion stocking. They would be knitted flat and then the two sides had to be stitched together, which is where the seam came from. It is still very difficult to make fully fashioned stockings and machines are not suited to the task as their manufacture requires a lot of dexterity. Because of this, there are only a handful of manufacturers worldwide who still make them, but the fit and quality of a pair of tights or stockings that are hand finished is certainly worth the search and the slightly higher price tag.

We are grateful to work closely with one of the few hosiery manufacturers who cares for these unique details, Gio. Gio fully fashioned stockings are finished by hand by their expert staff in their British factory. Why don't you give them a try?

» Autumn Is Here Time for Tights
» Pretty Polly Interview
» The Dos And Dont's Of Leg Wear
» The History Of Nylon
» Tights, The Most Versatile Kind Of Leg Wear
» A Huge Line Up Of Tights And Stockings
» How Tights Are Made
» Stockings Or Tights
» Hosiery Trends Over The Decades
» A Brief History Of Hosiery
» Choosing The Right Tights For Your Outfit
» An Interview With Charnos Hosiery
» All About Girardi Hosiery
» Wolford
» Wolford's 5 Steps For Making Tights Last Longer
» The Wolford Fatal Dress
» Red Or Dead
» Hold Ups, What They Are And What They Can Do For You
» Hold Ups
» Aristoc Ultra Bare is the best sheer tights range
» What Are Pantyhose
» What is the difference between leggings and jeggings
» Spanx The History Of The Power Panties
» The Different Types Of Lingerie
» Calvin Klein Underwear Essential For Under An Outfit
» Coemi Lingerie Have Amazing Nightdresses And Playsuits